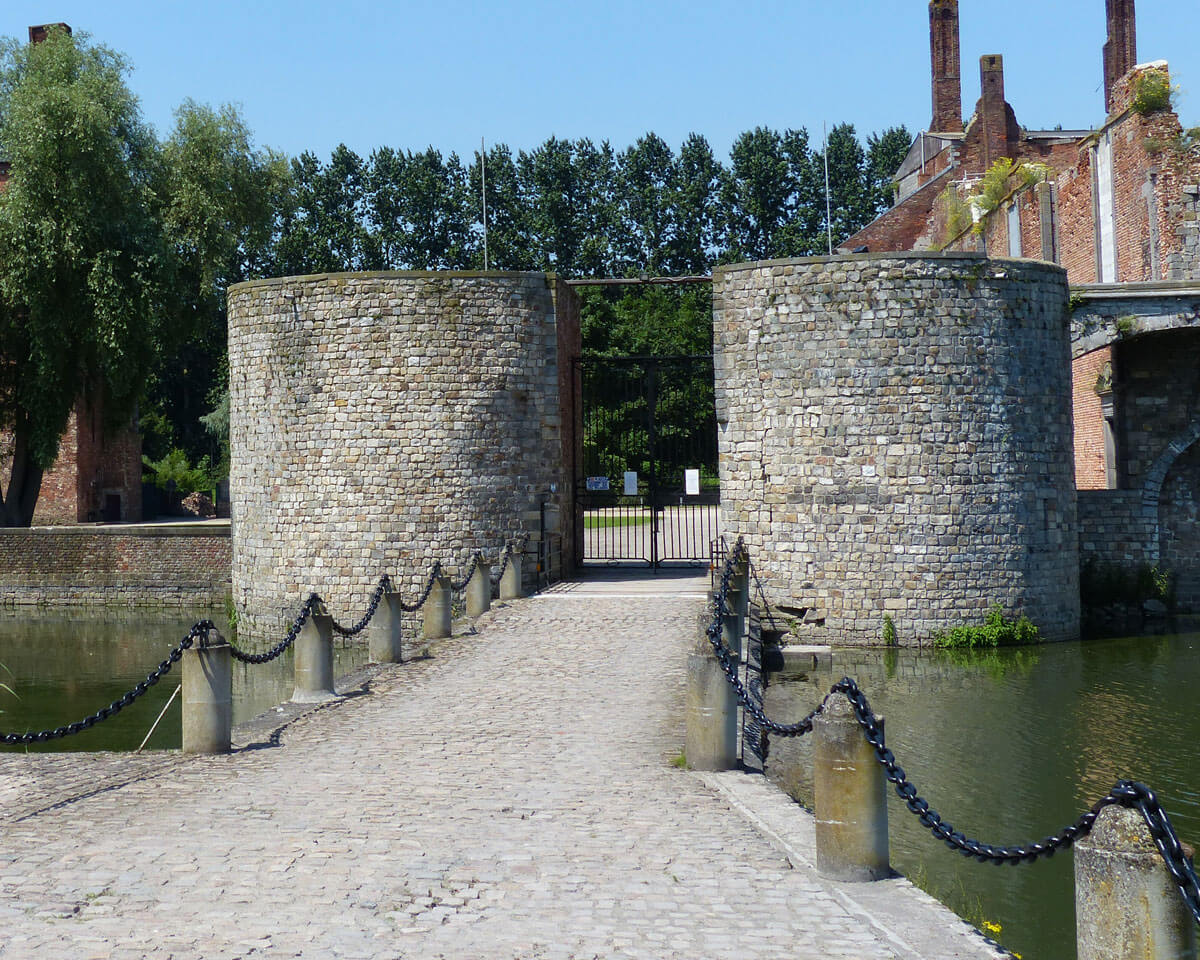 this part has been greatly reduced over the last two centuries, leaving only the ground floor under a terrace roof : two semi-circular towers stand on either side of a driveway closed by a Louis XIV gate dating from the late 18th century. Each tower has barrel vaults, a chimney, latrines and the remains of loopholes. In the Back, the foundations of an earlier castle have been unearthed and their outline can be seen in the paving of the yard. 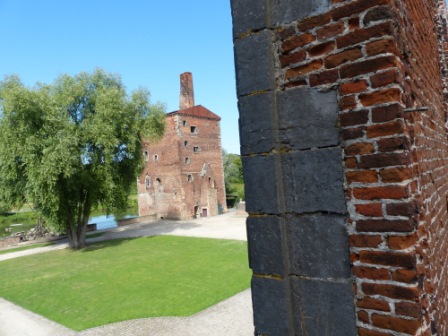 This has four levels, excluding the roof trussing which disappeared in the 20th century, had replaced intersecting ribbed vaults similar to those in the Wardens’ tower. Today, one of the highlights of your tour is certain to be the superimposing on the western face of four magnificent brick and stone chimneys. An intricate network of vaulted corridors built in the southern and eastern walls provides convenient access between the different halls on the various floors, the respective latrines and the spiral staircases which rise to the second level in the eastern part, and to the higher levels in the south-eastern corner. Light is provided by casement windows (north), mullioned openings (east) or open-work windows.

This comprises four floors on a rectangular plane, built in brick. The brick walls facing the moats have been covered with sandstone. The small windows are original features, whereas those with a casement date from 1548-1568. To the south can be seen an octagonal embedded turret with a staircase. The turret is built of brick, and the spiral of limestone. The flooded cellar has a barrel vault a brick subbasement. On the ground floor is a fine hall with two intersecting ribbed vaults on bases whose keystones are decorated with mouldings and bear the arms of the Enghien family. The embrasure of the western window gives access to a 14th century annex (former bakery) which lies above a cellar with barrel vaults (present Kitchen). There is also a small hall which was heated by a fireplace whose mantle could only be partly rebuilt. Towards the moats is a large archway from the old cavered way. On the two upper floors are spacious halls with no ceilings (the Duke’s bedroom).

Dedicated to St. John the Baptist, it is referred to as early as 1378. A plane-surfaced hall comprising two bays with a chevet consisting of three wall sections, with sandstone masonry. The ground was raised in two stages (by more than 1.5 meters – 5 feet). It has beautiful intersecting ribbed vaults resting on small columns embedded in the walls, with the vaults in white stone. At the first intersection of the ribs is a keystone bearing the arms of the Enghien family. The second intersection is painted with the arms of the de Croy. On the left when entering the chapel is a console, now mostly destroyed, showing a man in a lying position.

The facade on the moat side is standstone and replaces a crenellated curtain-wall. Originally it only had two levels with six bays set in them. It has large windows with stone casement decorated with moulding. The middle bay and the half-floor remaining date from 1600. The side facing the yard is made of brick (bottom of gallery). The door, with its limestone renaissance embrasure is from 1600 and bears the (restored) arms and motto of Charles Alexander de Croy, « Je soustiendray Croy » (I will support Croy). The large chimney stack, with its arcature decoration, survived until the Second World War.

Its plane is octagonal, and it has four levels: the first three dates back to the 14th century, and the fourth and the onion-shaped dome to 1600. On the first level you can see a fine ribbed vault consisting of eight cambered segments radiating from a central point and resting on bases decorated with leaves. The vaults are made of brick and the diagonal ribs of sandstone with keys bearing the arms of the Enghien family. On the second floor is a Louis XVI parlour with stucco decorations. The french windows give onto a patio surrounded by a balustrade (no longer existing). That patio replaced a covered way. On the third level, everything is practically still laid out as originally: embedded fireplace, latrine with a corridor bending at an angle and a niche for candelabras. The tower underwent a major restoration in 2015.

We are at your disposal to answer all your questions.